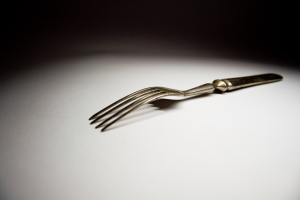 I don’t like to use my diabetes as an excuse.

Not long after my diagnosis, we stopped into a busy restaurant near the beach. The windows of the regal old manor overlooked the rocky bluffs and we arrived at the height of the dinner rush. No reservations, but I overheard my mother say to dad: “Let’s see if we can get a table. I’ll tell them she has diabetes and she needs to eat right now.”

Mortified. Ashamed. I couldn’t believe that my diabetes was going to be wielded as a weapon or as a quick pass ahead of those who had the forethought to make reservations. I quickly turned and explained that I didn’t need to eat right away; I hadn’t even taken my shot yet. My parents must have seen the look of fear on my face of being “outed” for no good reason. We headed back to the car and ate somewhere else. I don’t remember the meal we ended up eating, but I swore to myself that I wouldn’t wave the “D-card” if I could avoid it. No excuses due to diabetes.

Have a bad night with highs? Go to school. Power through. Chug liquids and ignore the fuzzy feeling in my head. A low at 3am? Go to work. Power through. You’ll feel better in a while. That was my teens and twenties and thirties. I didn’t want anyone to think that diabetes would make me weaker. Less competent. I may have been exhausted or felt queasy, but I was not going to let it get the best of me. (If I could go to work slightly hungover, I could certainly go to work hung-low-ver.)

Much like I’ve found that I can’t drink alcohol anymore without turning green for days after two beers, it’s also become apparent that I’m no longer able to avoid pulling the D-card. A severe low two nights ago had me canceling plans with friends the next day and let The Kid watch PBS all morning while I parked myself in a supine position on the couch. This summer, we went to Disneyworld and for the first time in my life, I used a Guest Assistant Card (first and last, as the rules changed after we went) to avoid standing in the sun too long. If it hadn’t been for that special consideration for diabetes, it would have been a very short and expensive day. (Even with the CGM, the lows came fast and furious. We would have spent most of the afternoon sitting somewhere not having fun while I recuperated.)

Lows sap the marrow from my bones. Highs have me swimming through molasses. Days where I ride the diabetes roller coaster derail me. I can’t power through anymore. I can only power down and hope that I’ll recharge within a few days.

Truth be told, until recently I couldn’t understand when other people with diabetes would talk about how they missed school or work because of their diabetes. In my head, I’d ask: “Why don’t they power through? I don’t get it. How can it be so bad?”

Ah, hubris. I believe that my fear of being treated differently and pride that I could power through prevented me from recognizing that while we all have diabetes, our bodies react differently. My luck has run out. Turns out, I’m not Super Diabetes Woman.

Now that I can’t bounce back, I see that when the D-card is pulled, it’s (most of the time) for a good reason - because it needs to be. I’ve had to learn that it’s perfectly acceptable to say that I had a tough night with my diabetes and that I’ll need to reschedule a get together. There’s no shame in asking for a little help if I need it. I can be excused from something because of my diabetes if I’ve done everything I can within my control and still end up with a sucky low. Or a sucky high. Diabetes won’t excuse itself, so I’ll have to excuse it.

But trying to score a primo restaurant table? Nope. Still not going to do it. Even if has a beautiful view.

I’ll use my D-card for good, not evil. 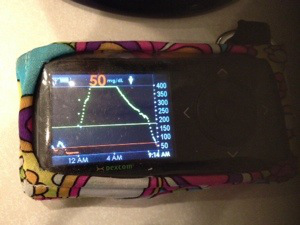 The Kid had a temperature of 102.3 and would only sleep if I was her human teddy bear.
My father had knee replacement surgery and I ate a Clif bar for dinner waiting to see him in recovery.
I was exhausted. I muffled the Dexcom under my pillow so The Kid wouldn’t wake up.
It didn’t wake me up.
Bedtime BG: 98.
12:45a BG: 39.
A stupidly large glass of grape juice and a few cookies.
1:20a BG: 159.
Temp basal of 70% for two hours. Go back to bed.
4:38a BG: 465.
Remind myself that just 8oz. of that juice is 40g of carbs. Not going to even talk about those cookies.
In the process of rage bolusing, I run out of insulin in my pump.
The Kid wakes up and watches me refill a cartridge, dose, and drink a large (but not stupidly large) glass if water.
6:45a BG: 226.
Cup of coffee. Dose for cream.
9:14a BG: crash.

My blood glucose is now back to normal this afternoon, but I’m not.

Ahh… Young Frankenstein. Mel Brooks is a genius and his amazing cast makes it an outstanding comedy that leaves your sides aching from laughter. If you’ve seen the movie, you know what I’m talking about. (Haven’t seen the movie? Please. Do yourself a favor. Rent it.) I was thinking about how hyperglycemia and hypoglycemia wreaks havoc on our brains (Not just diabetics, but everyone!) and Marty Feldman pops into my head with his buggy eyes* and says: “Abby…someone. Abby…Normal.”**

Lots of stuff pop into my head and Marty is not the weirdest one. But truth be told, the long-term impact that out of range blood sugars play in our lives has been bothering me for quite a while. It’s no secret that in the short term, hypoglycemia does a number on our heads. Mental comprehension suffers, motor skills go wonky (That’s the medical term. Look it up.), and verbally? Try having a conversation with someone who is dropping rapidly and get back to me.

Severe hypoglycemia is just downright ugly. The few times that I’ve been in the 20s and 30s found me wrecked for days after, both mentally and physically. Knock on wood, I’ve never fallen unconscious, but I have had glucagon and in one case, a bunch of paramedics hanging around my apartment waiting until I got above 70. Long-term? For those of us who try to maintain between 80 and 120, we can develop hypoglycemic unawareness. Our brain gets desensitized. Want the technical lowdown? À la Wikipedia:

If a person has frequent episodes of hypoglycemia (even mild ones), the brain becomes “used to” the low glucose and no longer signals for epinephrine to be released during such times. More specifically, there are glucose transporters located in the brain cells (neurons). These transporters increase in number in response to repeated hypoglycemia (this permits the brain to receive a steady supply of glucose even during hypoglycemia). As a result, what was once the hypoglycemic threshold for the brain to signal epinephrine release becomes lower. Epinephrine is not released, if at all, until the blood glucose level has dropped to even lower levels. Clinically, the result is hypoglycemic unawareness.

Nighttime hypoglycemia has plagued many of us (using my CGM pinpointed why I was so exhausted in the morning recently… I was going low and not waking up.) and I’ve had to set the hypoglycemic alarm on mine to “air raid siren” level and tweak my basals.

And let’s not forget, there’s that whole permanent brain damage or death thing. This cheery article (Not.) gives you some info on it.

But I’ve always been fuzzy when it comes to hyperglycemia. (Get the joke?) I’d never really investigated what long-term high blood sugars do to the brain. My control was not.good.at.all in my teens and 20s, spending a lot of the time floating through my days with numbers I shudder to think about. I’ve done my time in DKA, but have been very lucky. Long-term, what have I done to myself?

A New England Journal of Medicine article in 2007 kind of sugar coats it. (Another joke? I’m on fire today!) It casually mentions that there are “moderate” declines in motorspeed and psychomotor efficiency, but that’s it.  And I’m all like: “Cool by me. Dodged another bullet.”

But, if you’ve figured this out about me by now, I can’t leave well enough alone, so I dig deeper. I found a different conclusion:

Neural Networks, Cognition and Diabetes: What Is The Connection? is a 2012 article from the journal Diabetes. It states plainly that hyperglycemia over the long haul presents us with:

…an increased risk for development of significant disruption in cognitive function in the form of dementia.

Why? Again, but not so plainly:

Hyperglycemia may affect cognitive function by altering synaptic plasticity in the brain, increasing levels of oxidative stress, and/or subtly altering the cerebral microvasculature.

There’s a lot of eye-opening information in this article, and I strongly encourage you to read it.

There are days that I blame my inability to find the right word to describe something (simple stuff, like “water pitcher”) on a lack of caffeine or lack of sleep or just the fact that I’ve been exposed to foreign languages and sometimes words pop into my head that aren’t English. But I wonder… is it my hyperglycemic youth that is making my brain “Abby…Normal”? What do you think?

*Did you know that Marty Feldman’s buggy eyes comes from having Graves’ Disease? Learn something new every day.

**This is the scene from which the title of this post came. Watch the classic snippet here.