One of the lovely little complications that you can get from having diabetes is stenosing tenosynovitis, affectionately known as “trigger finger”.

What is Trigger Finger?

a common disorder characterized by catching, snapping or locking of the involved finger flexor tendon, associated with dysfunction and pain. A disparity in size between the flexor tendon and the surrounding retinacular pulley system, most commonly at the level of the first annular (A1) pulley, results in difficulty flexing or extending the finger and the “triggering” phenomenon. The label of trigger finger is used because when the finger unlocks, it pops back suddenly, as if releasing a trigger on a gun.

Let me add on:

The pain of trigger finger can become so bad that it wakes you up in the middle of the night. The locking of the finger in a curled position to an open position can make you see stars and clench your teeth and make you lose your breath. The inability to flex the finger renders it useless.

Trigger finger is not one of those items on the list of complications that you learn in your quest to understand what diabetes does to your body. Kidney disease, blindness, cardiovascular issues… they get all the attention. Those get hammered home in all the media and resource information.

Trigger finger isn’t even on the first page. In fact, until the first time it happened to me, I had no idea it was a complication at all.

Ain’t My First Time At This Rodeo

About ten years ago, I got “hitchhiker’s thumb”, which is trigger finger… except it was… yeah. My thumb. Both of them at the same time. (Long story. You can read it here.)

After The Kid was born, it was my index fingers. Both of them. Repetitive motion can trigger (sorry for the overuse of the word) trigger finger, and I was changing a lot of diapers. By the time I dragged myself to the orthopedic surgeon, I couldn’t change a diaper or move them much at all.

How Do You Fix Trigger Finger?

First line of defense that many people try is: NSAIDS (anti-inflammatory meds), splinting, and steroid injections into the tendon.

While for non-diabetics, the injections of steroids can help and make this issue go away, it’s not a successful course of action. Surgery is recommended to most people with diabetes: percutaneous release or open release. (The first is done via a needle inserted without cutting open the hand.) Open release surgery has been my only option, where the surgeon opens up the sheath surrounding the tendon and as it was explained to me: “the gunk gets cleaned out so that the tendon can smoothly move back and forth”.

So, right now, I’m splinting it and taking NSAIDS. I’ll most likely have surgery as soon as I find one I trust in the area (I moved last year…).

In the meantime, my typing is slow and a  very painful and I am apologizing to John about the level of cleanliness in the house. Unloading the dishwasher is a joke that isn’t funny. I can’t cut my own meat. My right hand is becoming less useful. I am having problems typing, which is why I haven’t written a blog post recently.

This has happened over the last few weeks. No warning. But I know the ending. And that it will most likely happen to other fingers in the future.

I’m hoping next time it’s one of my middle fingers. Because that’s what I want to give this complication. 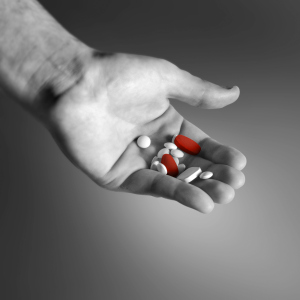 I knew the day would come when my existing medication regimen wouldn’t be enough for my diabetes. The reality check came when I got the results from my calcium score

and admitted that if I was a betting woman (which I’m not, for I’d be broke by now), my cardiologist would suggest putting me on a statin.

I would have won that one. I’m joining the millions of individuals who, along with a low-dose aspirin,  are part of the Crestor wave that’s sweeping the nation. 10mg for now and we’ll see what my liver is doing in about 5 weeks. The side effects that everyone has talked to me about (muscle pain and weakness) didn’t happen, so I’m thankful that I seem to be tolerating it. My cholesterol, while not being fabulous, wasn’t in the danger zone. (I love bacon and cream in my coffee. I avoid fried foods and red meat.) Will Crestor make a huge difference in my life? Much like everything else we do these days for diabetes, the only way we’ll know for sure is the absence of anything happening.

The kind doctor also broached the subject of lisinopril as a protectant for my kidneys. I’ve been down that road before. In fact, I was one of the first subjects in the Captopril clinical trial that proved that ACE inhibitors can help people with diabetes protect their kidneys. My blood pressure has always been a little on the low side. Even the smallest dose of an ACE inhibitor sends me into dizzy world with an occasional “I’m going down, please clear a section of floor” moment. Until they can make an ACE inhibitor that allows me to keep upright, it’s not happening. (Don’t get me wrong. I’m very happy with having a low blood pressure, because I have friends who take ACE inhibitors because their blood pressure is high.)

I’m beginning to wonder what’s next on the list of diabetes complications that I should be tackling. I’m not being pessimistic or negative. After thirty years (almost 31!) of not always stellar control of diabetes, the reality is that I’ve been lucky. One incident of CSME (clinically significant macular edema), trigger fingers, frozen shoulders, slight gastric delay and really? I’m just as healthy as the next person.

But we can never let our guard down, can we? Diabetes doesn’t always follow the “If it’s successful, nothing happens.” philosophy. Kidney issues develop without symptoms. Retinopathy in early stages have no symptoms. Neuropathy happens slowly (until I am told it bears down like a freight train…). Nothing happens for a long time, then it’s there.

So, in my case, if I’m successful, nothing happens. But I’m not waiting.