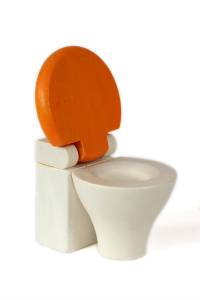 It’s cute and orange, but I still don’t want to pray to it.

I hate to puke.

Whatever you call it: technicolor yawn, tossing your cookies, ralphing, or my favorite… “praying to the porcelain god”, I try to avoid doing it at all costs.

I don’t think there is anyone who thinks it’s something fun to do. (Please correct me if I’m wrong.)

“Not much. I’m bored, so I’m just going to puke my brains out. Want to come over and watch?”

I get a flu shot every year now, because I have zero desire to lose my lunch (or dinner or breakfast) or feel like a freight train has run over me due to the inability of other people to wash their hands or cover their mouths.

A fellow T1 asked in a FB status about flu shots and I was surprised to see the myriad of responses. Some were positive, some were negative, and some left me scratching my head, wondering where they got their info.

I realize that if you’re reading my blog, you’ve got at least a few brain cells to rub together. (Take that compliment and run with it.) You may already have an opinion on flu shots, so let me give you some facts. (And then I’ll give you my opinion, because… well, it’s my blog.)

Here’s what the CDC has to say:

Over a period of 31 seasons between 1976 and 2007, estimates of flu-associated deaths in the United States range from a low of about 3,000 to a high of about 49,000 people. During a regular flu season, about 90 percent of deaths occur in people 65 years and older. The “seasonal flu season” in the United States can begin as early as October and last as late as May.

During this time, flu viruses are circulating in the population. An annual seasonal flu vaccine (either the flu shot or the nasal-spray flu vaccine) is the best way to reduce the chances that you will get seasonal flu and spread it to others. When more people get vaccinated against the flu, less flu can spread through that community.

So, read that last sentence again. Go ahead. I’ll wait.

Sometimes it’s not about you. It’s about the people around you. It’s about the woman ahead of you in line at the grocery store with the premature son at home. It’s about the guy next to you on the subway who takes care of his elderly parents. It’s the schoolteacher. The bus driver. The retail store employee who can’t take a week off because the paycheck pays the rent.

And the CDC page about the flu continues on to say who should definitely get a flu shot:

Getting a flu shot may not prevent you from getting the flu. As they say, nothing in life is guaranteed except death and taxes. But the likelihood of death by flu is diminished by getting a flu shot, which can prevent flu-related complications, per the CDC.

“But the flu vaccine has live viruses in it! No way am I taking something like that! I’ll just get the flu!”

That would be a no. No, a flu vaccine cannot cause you to get the flu. If you have a flu shot, you get a vaccine with viruses that have been ‘inactivated’ and are not infectious, or with no flu vaccine viruses at all.  If you get the vaccine through a nasal spray, while it does contain live viruses, the viruses are so weakened that the CDC claims it cannot cause the flu.

Influenza is a respiratory illness, but for some (like me), we get additional symptoms for free - like fertilizing the lawn or your floor or the inside of your wastebasket. For those who do get the flu, you’ll recover in a few days (up to two weeks). For others, it can progress to pneumonia, bronchitis, ear infections, sinus infections….or worse. I don’t want to be the “worse”. Hospitalization is worse. Death is worse.

(And healthy kids who die from influenza and didn’t get a flu shot? I can’t keep quiet about the need for everyone to get one. Check out Families Fighting Flu.)

You may have your reasons for not getting a flu shot. I’d love to hear them. Seriously.

If you haven’t gotten your flu shot, but plan on doing so, you can help the Juvenile Diabetes Research Foundation raise money by going to Walgreen’s or Duane Reade by October 31st and give them this coupon. The pharmacy will donate $1 for every flu shot, up to $100,00. I call that a win-win.

Now, onto my opinion.

I used to avoid getting a flu shot, down to flat out lying to my parents about getting one when I was younger. I’m petrified of needles and intramuscular injections. Seriously. What changed my mind? The realization that if I got sick, someone would have to take care of me and I would be putting them at risk and forcing them to take time off from work or taking them away from their own families. Financially? Being stuck in a hospital isn’t as bad as being stuck with a huge bill afterwards that could have been avoided.

Last year, we all got flu shots. And yes, when the flu came round, we did all get sick. ONE. DAY. EACH. Round robin style. I knew people who did not get a flu shot who spent weeks being sick - and then more weeks tending to other family members who got sick.

So, now I pull up my big girl pants, turn my face away and close my eyes while the nice medical person jabs me.

And the porcelain god in my house will hopefully have no one to pray in front of it.