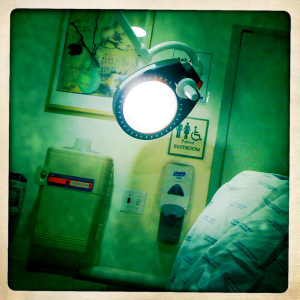 There are some amazing women who have shared their journey through pregnancy with Type 1 diabetes, and if you’re looking for insight and information, I’d encourage you to read Kerri’s blog, Six Until Me or Kim’s blog, Texting My Pancreas. Not here.

In my best Jedi voice, I say to you: “This is not the diabetes pregnancy blog you are looking for.”

I’ve had ample time to mull it over and truth is, my focus wasn’t about having every single blood sugar in range and an A1C of 5.5 % (which it wasn’t, but I’m not feeling any guilt over that). Diabetes accompanied me through my pregnancy, but it wasn’t all consuming. Please don’t misinterpret that to mean that I didn’t care about it, but diabetes was just one part of a very big picture.

As I had mentioned in a previous post, there were problems with maintaining pregnancies, so every precaution was taken to remove any possible negative factors. I followed my medical team’s instructions to the letter and was diligent checking my blood glucose levels to keep them as normal as I could. While it was never blamed in the past, I didn’t want my diabetes to be the reason for another failure.

I traveled quite often before my pregnancy and thought it wouldn’t be an issue. After my third flight in a month during the early days, I began to bleed while touring a facility - and it was a two hour flight away from my doctor’s office. I was their first appointment of the next morning and fully expected to be told by the sonographer that there was no heartbeat; in fact, I told her as much. I explained my past miscarriages and had already resigned myself to yet another notch on that horrible belt. She took her time and looked up from the monitor, quiet and composed, then turned a dial so that we could listen to the thump-thump-thump of The Kid’s heartbeat.

I couldn’t speak. I couldn’t breathe. And then once I could, I couldn’t stop crying. And then she started crying. My doctor later joked that both the sonographer and I were in shock.

The next trip a few weeks later? Same thing, except a colleague covered for me while I spent hours in a New York City ER waiting to see if I had miscarried. I hadn’t, but arrived back home with a diagnosis of a subchorionic hemorrhage. The diagnosis did increase a chance of miscarriage, but it was nothing I had done and nothing I could do - except stop traveling by air for my family’s peace of mind.

“I can’t fly to our national conference,” I told my CEO, sitting in my bulky way-too-big sweater that covered a seventeen week bump. (At that point, he told me later, he just thought I had gained weight and was embarrassed about it.) “I’m pregnant with a baby girl and I can’t travel by air. I’ll be driving.” And I did. (Well, actually I was a passenger most of the time of a two-day, seventeen hours in the car road trip from Atlanta to San Antonio.)

Driving was a wise choice for two reasons:

I will say that my endocrinologist appointments were not what I had expected. I was under the care of “one of the top endos in the country” and he is - when you can see him, which, for me, was almost impossible. I met with his staff of CDE’s throughout my pregnancy, tweaking basals and increasing mealtime boluses. I asked repeatedly to see the actual endo, but twice my appointment was moved to a CDE and once it was canceled due to him presenting at an overseas conference. 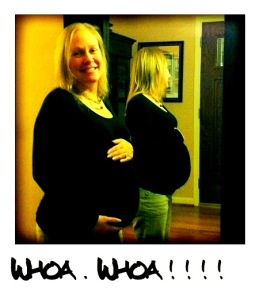 I was in my almost eighth month of pregnancy when I finally faced him. I waited in an exam room until 6:15 in the evening (for a 5pm appointment) and when he breezed in, apologizing, he looked at my chart then exclaimed: “Your fasting blood sugars are much too high! Who has been taking care of you?”

“Your staff for the last eight months.”

Let’s just say that he realized that he had said the completely wrong thing. He quickly made some changes to my pump settings, signed off on the delivery protocol and with that, he was off. I never saw him again.

My OB and my perinatologist were phenomenal. My blood pressure stayed normal. My A1Cs weren’t bad. (No, they weren’t 5.5%, but I didn’t have an endo who cared about that…obviously.) We watched her grow and kick her legs and arms. All her pieces and parts were gorgeous and her weight was normal. Due to the multiple high-risk nature of my pregnancy, we chose to schedule a C-section for safety. Nursery was done, tiny diapers purchased, and we thought it was smooth sailing for the rest of the pregnancy. Pride goeth before the fall…

She was born at 34 weeks, 6 days. Smooth sailing went out the window when my water broke late one evening. We believe that there just wasn’t any more room. I was a Weeble.

Looking back, I knew something was going on that day. My blood sugars were normal… far too normal. The fetal non-stress test the day before had shown that I was dehydrated (I passed, but only after I drank a liter of water during the test.) and I was clumsy and exhausted. As I lay down to sleep that evening, for the first time during my pregnancy (and pre-conception), I decided to not take my daily subcutaneous anti-coagulant injection before bed. “I’ll take it in the morning.” Lucky us. Saved me from major issues with anesthesia…

I knew upon arrival that my pump would be taken off and an IV insulin drip administered. (My admitting blood sugar was higher than what the endo indicated for continuous pump use and I was more concerned with the prematurity factor than fighting to keep my pump on.)  She spent her last night in my womb playing hide and seek with the fetal heart monitor, so the nurses had me in a Mongolian contortionist position to keep her in one place. We spent a few restless hours in a labor and delivery room, trying to sleep. We didn’t sleep, whispering excitedly to each other about our last night as “just the two of us”. Diabetes wasn’t part of our conversation.

A sweeter sound I have never heard, that first throaty cry from her lips. She was healthy. Hearty. Due to her early arrival, she spent her first two days in the NICU, where the nurses fought to hold her. (She was the only child in the NICU at the time that was in a regular bassinet, rather than an incubator.) Her next two days were in an intermediate care nursery (again, due to the prematurity rather than her state of health) and then… we all went home.

It was about her. 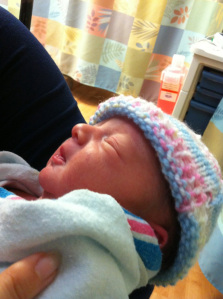