I have a knack for falling into opportunities ass-backwards. In fact, most of my life has been a series of well-placed falls… and this trip to Cuba was no exception.

A passing comment by a friend started it off: “We’re heading to Cuba in September.”

“That’s so cool! John and I were just talking about Cuba and how amazing it would be to visit. It’s on our bucket list.”

“We are going to be there the same weekend as the Pope.”

The look on my face must have made an impression, because he sat back in his chair and grinned:

“How would you like to come with the group?”

And that was how John and I ended up draining our vacation fund and visiting Havana and seeing the Pope.

Let’s talk a little bit about the Pope first.

I don’t get into religion on my blog because it’s about diabetes. (Mostly.)

What I believe and my spirituality isn’t something I share openly, but I will say this:

Pope Francis, as a spiritual leader for the Roman Catholic community, has knocked it out of the park and made some waves by cracking open some of the hypocrisies in his faith. He’s not grandstanding. He’s not trying to make friends. From what I’ve read, he has gone out of his way to continue to act and be a testament of kindness and love and service to the entire world – and he doesn’t care if you are Catholic or not.

Pope Francis, as a human being, is one of the dopest dudes on the planet. I have a platonic crush on this guy and would totally fist bump him given the opportunity. (No, I didn’t get the opportunity. Then again, I’d probably just hug him until I had to be peeled off by security.) He’s a superstar and I wanted to see him.

What did I do when he was about 20 feet away from me, rolling slowly by in his Popemobile before the Papal Mass, waving to the crowd as they surged towards him? I stood there, paralyzed, watching him as he blessed all of us. I was excited, grateful, and “blissed out” by this honor.

We attended the Papal Mass in Revolution Plaza in Havana, sitting right in front of one of the raised press areas. The press area provided shade (which was a rarity) in the open plaza of 300,000 attendees. Again, the falling backwards of all I seem to do found us sitting in plastic green lawn chairs, cordoned off from the crowd behind a fence. The leader of the group was ballsy; I’ll leave it at that. Half of our group were in the crowd and the other half… got seats. #sorrynotsorry

Didn’t spend a lot of time trying to document this experience with images. It wasn’t important to me.

What was important was being there, being a part of the historical event, and being “in the moment.”

I was close enough to breathe in the heady, sacred scent of frankincense and myrrh from the incense.

I thought about my Mémère and her devotion and how we joked that she said enough Hail Marys on her rosary to get all of us into heaven.

She would have liked this Pope.

And yes, I cried a few grateful, happy tears.

Yeah, I knew that things would be different in Cuba. One of those things is the lack of toilet seats.

Got off the plane, stopped into the ladies’ room and… hello. No toilet seat.

About 80% of the places we went had no toilet seats. Yes, we had one in our hotel room (and a bidet, because we’re so fancy… more on that later.) and there were toilet seats in some of the private restaurants (called paladars), but the museums? Nope. State run restaurants? Nope. Even stranger was the lack of water. You’d go to flush the toilet and realize… nope. No water. At one place, a restroom attendant stood at the sink, holding a bottle of water to pour over my hands so I could wash them.

Ever have the feeling of shame that comes from staying at a hotel that costs more than a family would make in a month? Yeah. That. I had it.

Our hotel was a “five star” (by Cuban standards) chain that was a joint venture between the Mélia Hotels International of Spain and the Cuban government. It had air conditioning. Our room overlooked a stunning view of the ocean (ever mindful of the Cubans who risked their lives crossing to the U.S. and those who didn’t make it), a TV with international channels, and an in-house physician. (Three people in our group used that service. Oy.)

It even had wi-fi that you could purchase for 5 CUC ($5) per hour, but forget uploading or doing anything except check email. It took John a while to upload a single image on Facebook. We also understood that many websites are restricted there and that anything we did online could be under surveillance. I took the opportunity to not be online at all, except for a quick email home inquiring about The Kid.

Your first view from the airport (and the last when you leave) after getting through the crush of Cubans awaiting family and friends is this:

Just in case you didn’t know.

Havana is beautiful. And heartbreaking.

When people asked me to describe it, they were startled when I replied: Chernobyl.

Imagine the Chernobyl incident occurring on an island, but no one gets sick. The buildings that have been lavishly erected during the invasion of the Mob in the 40s and 50s (before the Revolution) are still there, but most everything built during that period is slowly decaying. Walls are crumbling. Houses are falling in on themselves. Paint is disappearing.

There are bars on doors and windows, but when you view inside, rooms aren’t filled with large screen TVs and computers and things to steal. They’re filled with people, sitting. Waiting. 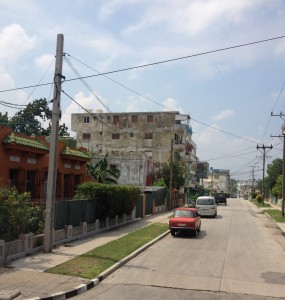 Where the tourists are (think “Old Havana”), the buildings are cleaner, paint is applied, and it’s a good show. Our tour guide kept talking about all of the renovation projects that were happening… but in our opinion, that’s what it was… talk. A lot of work has to be done to get these buildings to be habitable.

We ate at state-run restaurants and privately owned restaurants (paladars). Our first night, we dined at the most well-known paladar: La Guarida. If you go to their website, you’ll see the pretty pictures. What they don’t show is that the first two floors of the restaurant are unfinished. People live in the building on all the floors, including the top floor where the restaurant is.

La Casa, Vistamar, el Hajibe, Cafe del Oriente… all lovely. All part of the tour. Had we had time to venture off on our own, we would have gone to a few different restaurants. Another time.

I have no idea what “street food” would have tasted like. Sorry.

You’ll find a lot of chicken and pork dishes in Havana. Delicious, all of them. Seafood, obviously, too. I didn’t go hungry.

Nor did we go thirsty. Because we were in a tour group, we got a lot of “welcome” drinks – mojitos.

We were told to NOT drink the water from the tap while we were there for health reasons. Bottled water cost 3CUC ($3) per bottle and you couldn’t find bottled water at the local Supermercado (but you could have your fill of pickles and canned sausage, from what a friend told us who visited).

The water was bottled in…Cuba by the government owned bottling company. (The ice cubes didn’t come from bottled water, but if you drank a mojito, you got ice.) There were two types of beer available: Cristal (light beer) and Bucanero (a yummy darker beer that was refreshing at lunchtime).

Your soda choices were: cola, orange, citrus, and diet cola, all bottled by…again… the government owned bottling company. (At the private paladars, you could order a Coca-Cola Light, which is diet, but the formula tasted off, even for a Coca-Coca Light, which I’ve had in other Caribbean islands.) You could also get imported wines, but nothing spectacular. (However, the sangria was delish.)

I ordered a diet cola and it wasn’t bad. A little perfume tasting at the end. Wondering what was the artificial sweetener they used, I turned the can around and read this:

I love Cubans. They are open, forward, unabashed, and generous. (Sometimes a little too forward… one of the woman in our tour group was told by her housekeeping maid that she should give her the black purse on her table, because “she had two sitting there.” It was a Tory Burch purse. The woman politely declined.)

My Spanish language skills prevented me from having in-depth conversations about physics. Or anything more than directions to the bathroom that most likely did not have a toilet seat. That being said, not once did I get a roll of the eyes as I asked, gesticulated, or charaded my way through a transaction.

On our way back to the airport, we stopped next to an open air bus. I looked over and saw a mother with her daughter sitting on her lap. Our eyes locked, and the mom pointed up to me, the young girl following her finger. We grinned at each other and waved like idiots, continuing to wave as our bus turned.

It was a wonderful and fitting good-bye.