Does this illustration scare you? 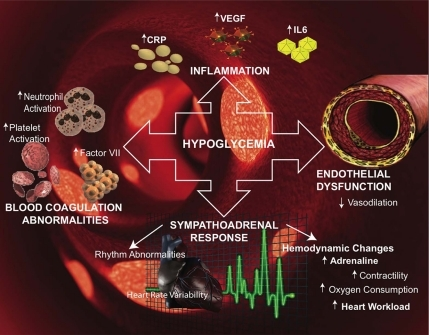 I first encountered this slide during an academic lecture given by Dr. Mikhail Kosiborod, MD when I attended the International Hospital Diabetes Meeting in May. He was sharing data about cardiovascular events and outcomes. (If you’re not an academic, the smart people begin to sound like Charlie Brown’s teachers after a while.) But when this illustration came onto the screen, I frantically scribbled the study’s authors down.

This slide was the first time I saw so plainly what was happening to me when I had a moderate hypoglycemic episode. (Dr. Kosiborod said that a “moderate” hypo was 57 mg/dl or less.) Not just the “I feel like I’m dizzy and not all here and let’s concentrate on something insignificant and is it hot in here?” reaction. This was what was going on inside without me feeling most of it.

Complications are not always from high blood glucose levels

We all know the long-term implications of high blood sugars. It’s that same old “-Opathy” chant that everyone sings loudly: “Retinopathy-neuropathy-nephropathy” with the back-up singers humming: “Don’t forget about stroke and amputation and arteriosclerosis and…big finish, everyone! Gum disease!”

But with lows, it’s a quick ditty: “Unconciousness, seizure, death.” It’s not a chart-topper, but it can be #1 with a bullet if you’re hypoglycemic. When I had those times of “Whoa…let’s stand in the kitchen and daze off into space,” it didn’t feel like I was doing any damage to my body. Sure, I felt like my head had been run over by Gravedigger and I was treading in molasses for several hours after some lows, but I recovered. Or so I thought. Now?

I am setting myself up for long-term complications with repeated moderate low blood sugars. So are you.

Here’s what happens (you can follow along with the slide, but I’ll break it down in terms we all understand):

Every moderate hypoglycemic reaction sends out wonderful proteins to increase inflammation in our body. (I’ll cut to the chase. We don’t want that.) They are:

Vascular endothelial growth factor (VEGF ), is a signal protein that helps to promote the growth of new blood vessels. We need VEGF as we grow in a womb (to create the blood vessels), after exercise or injury, and VEGF can help create new blood vessels when there is an obstruction. But, much like really good food, it’s only good in moderation. Too much of it (“overexpression”) can contribute to asthma, retinal problems, and  cancers.  The levels go up when we have a moderate hypoglycemic episode.

C-reactive protein (CRP) is a protein released in response to inflammation. Some of our organs, like colons, show a greater risk of cancer when they’re chronically inflamed. This lovely protein also raises our risk for heart disease, high blood pressure, and coronary artery disease.

Interleukin 6 (IL-6) is an interleukin (No, I’m not a medical professional or a biology whiz, so I had to look it up. Fancy word for protein) that does double duty: it promotes inflammation and can help with healing in certain situations. In this case, when we have a low, it’s under the inflammation category. And it gets busy.

Time for a breather. Here’s a picture of a bunny, because this stuff is pretty heavy. Warning, after the bunny, there are no more cute things. 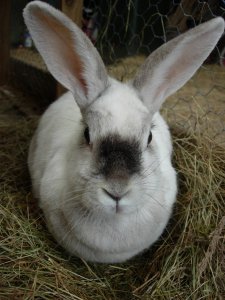 If it’s a medical term and it starts with “abnormal”: uh-oh.

Factor VII is another protein in our body that helps the clotting process. Too little Factor VII = hemophilia. Too much Factor VII = clotting when there shouldn’t be. Moderate hypoglycemic episodes increase this protein in the body.

Platelet Activation - platelets help to staunch bleeding by clumping and clogging a blood vessel. Great for stopping bleeding, of course, but lousy when the result is thrombosis. We increase platelet activation when we’re low.

We release adrenaline, epinephrine and norepinephrine as our blood sugar sinks into the basement. It’s that “fight or flight” feeling; that “out-of-control and my heart is racing” feeling. It’s our body’s adrenal response to get us to do something.

When we have multiple hypos, we can developed a suppressed sympathoadrenal response - and that’s hypoglycemic unawareness. Clinicians talk about raising a target blood glucose level because a person with diabetes has hypo unawareness to retrain the body to have that adrenal response again.

But your nervous system also factors into play here. Your autonomic nervous system. Your heart is part of this system. A moderate hypo causes your heart to beat faster (“Thud-thud-thud”) and can cause long-term issues with the timing of your heart (arrhythmia). We’re making our hearts work harder.

It’s Not Over When You Think It’s Over

Your blood glucose level comes up and the hypo is over. But what happened to your body is not over. Not by a longshot. This is what I learned at the symposia at ADA’s 75th Scientific Sessions on Hypoglycemia.

Vascular issues can last up to two days and blood coagulation issues for up to a week.
Every moderate hypoglycemic episode builds up inflammation and coagulation responses in my body. One sucky hypo a week was not uncommon for me, even with a Dexcom.

What Am I Doing Now?

I’m doing everything to prevent a moderate or severe low blood sugar. The research I did shows me that I can change the way I react to my lows and help prevent these “issues” from happening.

My CGM is constantly on my body and I’ve set it to alarm at 80mg/dl so that I’m still in my right mind to look at it and take action if I need to do so. Has this helped?

Instead of alarming at 70, when I often tell myself that I’m invincible and that my blood sugar will go back up on its own (I’ve said this to myself a lot…Yes, I know. False.), I’m catching that low. It also has prevented the response of eating everything in the kitchen because I’m in “fight or flight” (or “stuff your face or pass out”) mode. My stress level is lower and I feel more in control.

And that is what this post is about… giving you the info and giving you the opportunity to help yourself, because while you can’t control having diabetes, you can control how you manage it. And hypos are not so innocent.