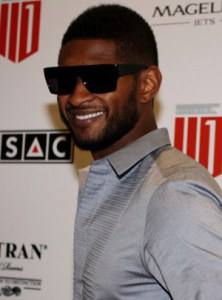 Usher, a music celebrity and judge on The Voice, revealed yesterday that one of his sons had been diagnosed with Type 1 diabetes in the last year. The Diabetes Online Community was all a-twitter at the news and my news feeds on FB were clogged with “Hey, look at this interview!”

Everyone thinks they know what it’s all about, but unless you’re part of a family impacted by this disease, it’s a soundbite and an “Oh, I’m so sorry to hear that,” before moving on to the next news story. Thank you for sharing an intimate part of your life with the general public and talking about making sure your child eats healthy meals.

You will, I have absolutely no doubt, be contacted by more than one diabetes organization asking to be a spokesperson for the cause. A famous person is always good for a wave and a smile on the stage, and a famous person with a connection to diabetes? Booya. They will want to you rally around diabetes research and a cure and raising diabetes awareness.

How about you focus on raising your children instead?

There will be plenty of time to advocate (if you want) in the future, but you’re still in that “What the hell happened?” phase of the disease. In addition, you’re also dealing with a family that does not live together, so factor in an ex-wife who I’m sure is just as worried about her children as you are, and there will be arguments over his care.  Teach your child with diabetes to be strong and self-sufficient and your child without diabetes to be understanding and compassionate. (By the way, if you don’t think his brother isn’t impacted by this, think again.)

Diabetes isn’t going anywhere. It will still be here if you want to talk about it. Look, other famous people have taken different routes in advocating: Brett Michaels and Mary Tyler Moore are solid advocates (and even Robin Thicke has gotten into diabetes fundraising - his brother is T1). Paula Deen admitted she was Type 2 when she could make money off of it. Tom Hanks mentioned it once on late night television that he has Type 2, but hasn’t said a thing since. Hell, Halle Berry won’t even admit she has diabetes anymore.

So, for now, learn all you can about this disease. Send your ex-wife and kids to Friends for Life this summer. Do what you can to keep him safe and feeling loved and supported. Make sure he knows that he did nothing to get this disease. I’m sure that you’re already doing all of this, but make sure that you are supported, too. Parenting is hard enough, but parenting a child with diabetes is going to be a whole new ball of wax.

If you need the Diabetes Community, online or in person, we’re here. There are a lot of great people who would be willing to help, famous person or not. You’re a parent of a child with diabetes. You’re part of that club that no one wants to be in.

I wish you the best. You’ll need it.

And for the rest of us…

Remember The Diagnosis? Those days and months following the game changer of your life? It was a rough and heady time, with so much to learn and understand. After 31 years, I’m still learning new things about this disease.

So, please… back off on Usher and a crusade to have him become the beacon of advocacy for diabetes. He was brave to mention it openly. Don’t expect him to rally the troops and become a mouthpiece for organizations. Let him decide for himself, on his own terms, if he wants to be a part of our community at all. (We can be a little pushy at times…)

Nothing has changed since yesterday, except eighty people got The Diagnosis. Today, eighty people will get it. Tomorrow and the day after… He, despite being a celebrity, is no different. He is a parent of a child with diabetes.

While you think he may be able to reach so many people to raise awareness and money for diabetes, it should be his decision… and his family’s decision to become the poster family and the center of attention. There are other famous families who are already doing a spectacular job of that. And there are also families who are not quite so famous who are already doing a spectacular job, too.

Diabetes isn’t going anywhere. Neither is the Diabetes Community. We’ll be here if and when he wants to join us.