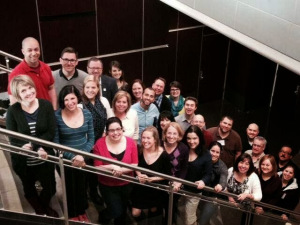 It took very little effort to transcribe the few notes I took about the technology aspect of the Medtronic Diabetes Forum. The difficulty I have in sharing (more than my initial thought) what those in the room said to each other comes down to this:  I am still processing what it means to us as a community and to me as a person.

The afternoon of the first full day was spent in a brainstorming session led by Bennet Dunlap, George Simmons, and Scott Johnson. Rapid fire, small groups, top answers. We made fast work and faster decisions about what we saw as ways to use social media and our voices, but one of the questions (and one of the brilliant answers given by Sara Nicastro) caught me off guard.

To paraphrase, the question was this:

“What can you, as an individual, do to help the community as a whole?”

Sara’s answer stunned me. “Get the F* offline.” (If you know Sara, then you’ll realize that she doesn’t curse. She used the notation F* to mean exactly how serious she was, but she didn’t actually use the expletive.) Sara is heavily involved with her local JDRF chapter and did an incredible job fundraising for the JDRF walk. She recognized her strength and is looking to bring that spirit to her local offline community. (While spending a ton of time sharing her talents online as well. I’m in awe of people like her - and her.)

Others shared their thoughts and ideas and we came up with a doable list, although it won’t all happen at once or even this year. I see each of the ideas forming into concrete plans broken down into workable pieces, some of which will take funding while others will take people power.

The second afternoon was handed over to David Lee Strasberg of the Lee Strasberg Theatre and Film Institute. He’s a T1 and a T1 parent, so he’s part of the club that no one wants to be in…two clubs, in truth. Strasberg’s father, Lee Strasberg, trained a lot of the great actors using the “method acting” technique and his methods continue today. David used his skills and talents to teach something that may seem simple, but isn’t: asking.

According to Strasberg, there are four steps to asking:

The room buzzed as we participated in various exercises to see how these four steps could be accomplished  and then it buzzed even louder as the group put it into action. The Spare a Rose campaign is coming up again and ideas on how to kick it into high gear whizzed around. People threw out suggestions while others grabbed those suggestions, saying: “I got it.” It was electric. Magical. Inspiring.

That’s what happened at the meeting when the advocates there talked to one another.

As all of this was happening, I got introspective (and apparently my face looked “vexed”, according to Kerri). My head veered into a dark space, where I recognized that while I have no problem with “the Ask”, I completely and utterly suck at the Relationship part of the equation.

When I worked into an office environment, my staff knew that they didn’t need to couch their requests or build up to what they wanted. When they knocked on my door, they were ready and fired away. That’s how I liked it. We were all busy and they knew that I trusted them to get stuff done, so if they needed something from me, they got it (if it was reasonable and within my power). I’ve been told that I can be assertive and a bit abrasive. My filter to social niceties can be warped at times.

It’s not always like that in the world, of that I know. For as forward and raucous as I can be with my friends, I’m not big on small talk and feel awkward in some social settings. (In fact, it happened at the forum. There were people I wish I had gotten to know better, but I flunked the “put yourself out there” portion and missed a lot of opportunities.) I’d much prefer to be plunked on a stage in front of hundreds of people, as I’m more comfortable sharing and baring my soul (and my requests for help) when I don’t have to look into the eyes of the other person.

So, my answer to the question about what I can as an individual to help the community as a whole is to work on the Relationship building. I’ve got to reach out and connect with other advocates, people in the diabetes space, and government. It’s a scary proposition and challenge for me and one I know will take a lot of effort on my part. But it’s worth it if building a relationship helps the community as a whole.

Every single person who attended the Medtronic Diabetes Advocates Forum is talented and extraordinary, including the members of the Medtronic Diabetes team. It’s my hope that as we build relationships with each other to create a groundswell for diabetes advocacy, we build friendships and learn from each other as well. I couldn’t do any of this without the inspiration and support from the entire community and the champions that sat in the room (and many of those who were virtually there).

Asking is easy for me, so I’m asking this from you: Help me learn how to build strong, lasting relationships that can help this community be a undeniable force.

(And help me achieve better blood sugars. Wait. Is that asking too much?)