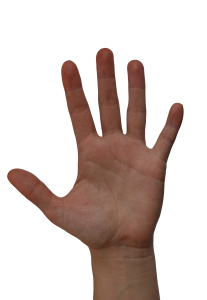 This is obviously not my hand. It doesn’t have puncture marks on the fingers.

I’m not into “Wordless Wednesdays” (Mostly because I like to talk about the image that I share, which defeats the purpose of “wordless”), but I’m all about alliteration, so I’ve decided to start my own weekly thing: Fab Five Fridays (Because then I can talk about stuff I want.)

Some weeks it may be a Fab Four Friday because I can’t count or I’m feeling very Beatle-esque. Other weeks I could be spouting out a whole bunch of stuff that may be more than five, but finding stuff that’s really fabulous. I want to introduce you to people, places, things, and let you also peek into the secret cubbyholes in my head - and this is the way I’m doing it. Most of it will be diabetes related, but I’m not all diabetes so you never know…

1. Ever watch Zombieland? Hysterical 2009 movie about how wry, dry-humored youngsters survive a zombie apocalypse… and that’s all I could think about when I read the articles this morning about the  potential Type 1 vaccine. The vaccine could be the equivalent of a “double tap”, which is one of the rules that the main character comes up with to ensure the demise of any zombie he meets. (Don’t ever think one hit will kill a zombie.)

The researchers have seen promising results in shutting down the autoimmune response that kills off the dysfunctional immune cells (which in turn kill off our beta cells) without shutting down the entire autoimmune system. It’s so cool to think that this might work, but I keep wondering if zombie immune cells would go down even with a double tap… or just rise up again later on?

Cool blog post from Stanford (where the research is happening) here: Can a series of DNA vaccine shots halt type-1 diabetes progression?

If you want to see the abstract at Science Translational Medicine that started all this fuss, it’s right here: Plasmid-Encoded Proinsulin Preserves C-Peptide While Specifically Reducing Proinsulin-Specific CD8+ T Cells in Type 1 Diabetes (Note: That certainly doesn’t sound quite as sexy as “Type 1 Vaccine! Hooray!”, does it?)

2. If you want a great personal account of an ER visit, you have to read Mike Hoskin’s post over at Diabetes Mine: Diabetes Care in The Hospital: It Ain’t Pretty - not only is it sobering (and I am so glad that his mom is OK!), but filled with great information that serves to frustrate me more. It appears that PWDs are taking our lives into our own hands by going to an ER these days - and I’m not sure who is to blame for that. You probably have an opinion on this topic, so take a gander at it…

3. While it’s been out in Europe since 2009, the Medtronic MiniMed Veo insulin pump is now getting some love here in the U.S. - and it’s long overdue. This article by Bloomberg: Medtronic Insulin Pump Cuts Deadly Night Blood Sugar Lows gives a great description of what it’s supposed to do and what Medtronic wants to do in the future.

The feature known as “threshold suspend” stops insulin delivery for two hours after blood sugar drops to a dangerous level. The study presented at the American Diabetes Association’s annualmeeting in Chicago found insulin pumps with the suspend function slashed low blood-sugar levels at night by 32 percent compared with those that didn’t have it.

Just 32 %? Really? Come on over to my house, researchers. I’ll show you that number is greater.

Medtronic isn’t alone in this “your pump can do everything except brew cappuccino” game. Animas also put out a nifty little press release about their closed loop system trials… and you can read about that here.

You might be asking yourself: what are they after? Here’s the FDA explanation of variations of the new generation of pumps.

I think camps are going to begin to form along the lines of who uses a Dexcom versus who uses a Minimed CGM… what do you think?

4. I’m trying to get my sweatabetes routine up and running these days, but the badasses over at Insulindependence have taken PWDs getting active to a whole new level. They have an award ceremony this year with a YouTube campaign, and my friend (and yours) Scott Johnson is one of the nominees. In his nomination video, he gives his words of wisdom on exercise: patience, educating yourself, and drawing on the support of the online diabetes community. He needs our support - go watch his short video and help him get the votes he needs for the $5,000 award. (There are a lot of worthy nominees… I think they all should get $5,000!)

5. I got an email from Harriet Bridges and it went like this:

I am a 24 year old Type 1 diabetic living in the UK, currently conducting some health psychology research regarding diabetes. I am looking for participants with diabetes (any type) to complete an online survey in order to help me raise awareness of the need for better psychological support for individuals with diabetes worldwide.  The link is: www.surveymonkey.com/s/important-diabetes-survey

I took the survey and now I want to see the overall results, because the survey was interesting! Take it if you have time and help a PWD and fellow DOCer out!

That’s my fabulous five for this Friday. (Got something you think is fab? Share it with me! Shoot me an email from the contact page!)