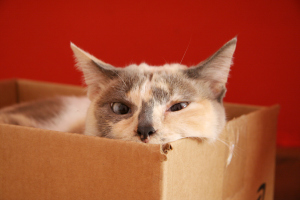 Schrödinger was this dude (esteemed physicist, whatever) who came up with a paradox called Schrödinger’s Cat. Must be nice to be able to name a paradox after yourself, eh?

The concept is not pleasant, especially for the cat, but here’s the explanation of the paradox: a cat, a flask of poison, and a radioactive source are placed in a sealed box. If an internal monitor detects any radioactivity, the flask shatters, releasing the poison that kills the cat. “The Copenhagen interpretation of quantum mechanics implies that after a while, the cat is simultaneously alive and dead.” (Thanks, Wikipedia.) It’s both alive and dead…if you don’t look inside the box. Open that box and you see the cat either alive or dead, not both alive and dead. “This poses the question of when exactly quantum superposition ends and reality collapses into one possibility or the other.” (Yeah, Wikipedia. That totally went over my head, but it sounded cool.)

This post is about diabetes and not quantum physics or superpositions or reality collapses. Promise.

Here’s what I take away from this paradox:

I heard about the TrialNet Screening for Type 1 diabetes a good while ago. This isn’t a bunch of local yokels sitting around with pie in the sky ideas. There are centers all around the world working together for a common goal: prevent Type 1 diabetes.

Please take a moment to stop and groan at that bad joke. I’ll wait.

What is the TrialNet Screening for Type 1 diabetes about?

The Pathway to Prevention Study is a two part study - screening and monitoring. A tablespoon of blood will give the study researchers enough to analyze for certain autoantibodies (proteins made by the body’s immune system) that could indicate that cells in the pancreas are damaged. What is amazing is that certain kinds of autoantibodies can be found in the blood years before type 1 diabetes occurs. The autoantibodies they test for are GAD, ICA-512, mIAA, ICA, and ZnT8.

Results are given to you by the researchers. If there’s no autoantibodies present, you can be re-screened at a later date (There’s nothing certain in life, so…). If the screening blood tests show that these autoantibodies are present, the study will ask the relative to participate in the monitoring part of the study.

Depending on the number of autoantibodies found in the sample, there could be annual or semi-annual monitoring.

If you are the lucky relative of a Type 1 (and I say lucky, because we are a super duper bunch of peeps…):

You might not be able to be in the study if you use certain medications, such
as:

Why would you do it?

For the fame and fortune and millions of adoring fans? Nope.

The decision is your own, but by participating in the study, you may (and when I say “may”, you know that means there are no guarantees) be able to participate in other studies if you do have autoantibodies, including prevention studies. Yes, I know that right now, there’s no way to prevent Type 1 diabetes (despite what some stupid people say on the Internet), but we don’t know what the next few years will bring. I never thought I would look down to see a graph of my blood glucose on a monitor next to me, but here we are. I’m hopeful for the future of medicine. Each person that is tested gives the researchers more data. That’s a good thing.

For more information on TrialNet - and how you can sign up for online screening and have blood drawn wherever you are in the United States (which is new and a very cool thing), go to the Pathway to Prevention site here. They will also be screening at the Friends For Life Conference in Orlando, FL in July, so if you’re going to be there…. consider it.

I always wondered how I would feel if I was my brother or my niece or daughter, who are all eligible to participate. With a single blood test, they could learn if they were at an increased risk of developing Type 1 diabetes.

And while it hasn’t happened to me, it has happened to my sweet friend, Christina of stickwithitsugar.com. (You can read her story of TrialNet and how she feels about Schrödinger and his cat.) (And you can give her a little love, too.)

I know that when the time is right, we’ll have our kiddo tested. And then we’ll open the box.