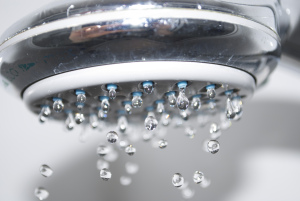 Dex died a heroic death on Saturday morning, desperately trying in his last gasps to give me an accurate recap of my post-breakfast spike before it sputtered and quit. The sensor had a good run (except for a few “You might be low, but…. Oh, hey, you’re low…” moments) and I meant to insert a new sensor that afternoon.

Life gets in the way of my diabetes management at times. Saturday whizzed by in a blink and Sunday arrived with plans to build an ark along with a downpour and thunderstorm that shook the house. The kid and I played indoors and I didn’t get to shower. (I put in a sensor or a new insertion set after a shower; the warm water helps to soften my skin and, while I’m sure it’s all in my head, it hurts less.) When I collapsed into bed that night, I realized that it Day 2 of no sensor and just frequent blood sugar checks. I have become very attached to my Dexcom and I knew that I had to pop a new sensor in soon.

But Mondays are always a little hectic. It’s our “run around like crazy people while jumping and learning to interact politely with other kids” class and someone didn’t want the shower turned on at all. We were going to be late.

“No. No. NOOOOOO.” She runs around, naked as a jaybird, streaking through the living room like Will Farrell in Old School. (Caution: the link is inappropriate for small children or easily offended people. Click at your own peril.)

“OK, then I’m going to go take a shower by myself.”

“NO. NOOO. NOOOOOOOOOOOO!!!” She is no longer a toddler. She is now a pterodactyl, flapping her arms and screeching until my ears bleed.

I calmly walk into the kitchen and check my blood sugar before I get into the shower. 162 post-prandial. I’ll take it. She’s throwing small balls of Play-Doh at the ground while muttering something about doggies. I’ll take that, too.

The showering commences and now she is sobbing pitifully on the other side of the curtain. I ask if she wants to come in and she nods yes while running away. The cries grow louder and I peek around to see her in full-force snot production.  While I’ve shampooed and scrubbed and gotten perfunctorily clean, my post-shower routine will now involve consoling my snotty dinosaur.

Guess who didn’t put her sensor in?

About the time we’ve pretended to eat strawberries and drink tea and are ready to go under the parachute with the other kids, my right eye blurs. I ignore it. This is what my brain says: “I can’t have dropped that much in such a short time. I’m tired. And we need to sing silly songs with hand gestures. You’re fine.” Of course, I’ve been jumping around with her and participating, but my brain thinks that’s not exercise. Silly brain.

My stomach growls in time with the chirping children and their off-tempo clapping. I begin to think of the jellybeans stashed in my purse in the cubbies at the other end of the room. By the end of the class, I know I shouldn’t have listened to my brain. I’m low. I grab the Ziploc of jellybean goodness and shove a handful into my mouth while the munchkins line up to get stamps on their hands (and their bellies, because two stamps are never enough). By the time we get to the car, I’m coming up, but feeling down.

You see, I love that my little ball of energy can brighten my day, even when she’s chanting: “Naked! Naked!” and not minding me. But I have to mind my diabetes, otherwise I won’t be able to smile at her and roll my eyes before asking for the umpteenth time to keep her diaper on. I don’t want her to have to worry about me or get freaked if I pass out in public - or worse, in private.

So, the sensor is back on. And the next time she screams about not wanting anyone in the house to shower, we’ll have a talk about how Mommy needs to put Dex back on and the shower helps. She likes Dex. So do I.