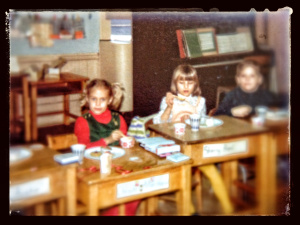 We are both devouring Hoodsie Ice Cream Cups.

I’ll let you in on a little secret about me.

I can’t fly. My nunchuck skills rank up there with Napoleon Dynamite. Hell, I can’t even make my own insulin. My special power is this: I can make weird connections with everyone I meet, virtually or in the flesh. Give me a few minutes and I can find out what we have in common and often, it’s surprising. I bump into people in places I’d never expect.

It’s inherited. My dad tells a story of how he and my mother boarded a train stopped in Nowhere, Switzerland (OK, so there isn’t a town called Nowhere, but it was so tiny the station was a wooden shelter.). They sat in an empty car and at the next little town stop, a family of four joined them. She heard them speaking English, asked them how their vacation was going, and in three minutes, discovered the man was the older brother of one of her best friends in high school.

I’ve walked into Paddington Station on my way into London from Heathrow and ran into a university classmate on his way to Heathrow after visiting his brother. We went to university in Canada. He lived in Greece. I lived in the United States and had taken this trip on a whim with a “buy on Friday, leave on Monday” deal.

It happens to me all the time, but sometimes I don’t like making a connection.

I went to first grade in a small community; so small that we had only two first grade classrooms with eighteen students each. All the girls crushed on Michael P., but Sherry got to sit at the desk next to him. I was insanely jealous. (As insane as a six-year-old can be.) I don’t remember much about that school (After all, I’m old, according to my niece, so it’s like I went to school riding a dinosaur in a toga.), but what little I remember boils down to this: Hoodsie Ice Cream Cups rule.

The picture in this post is of me (Rocking pigtails and a green shiny velour jumper…), Sherry, and ::swoon:: Michael P.

We moved away that summer and settled in another state. Enter diabetes, stage right. I’m in and out of Joslin Clinics inpatient Diabetes Treatment Unit (DTU) for one reason or another (They couldn’t get my insulin regimen to jive back then with my adolescent hormones surging through my body.). At fourteen, I was used to the routine: waking up with a cotton gauze pad stuck to your ear (from a blood sugar check at 3am and slept through), sitting in the cafeteria eating your breakfast while filling out a menu for the next day, classes, and then break time in the gym, where teens did more socializing than playing basketball.

Two girls walk in, deep in conversation. They’re new on the DTU floor, and the rest of us had been there a few days and were fast friends. They join us in passing the ball half-heartedly around and begin to talk. Get a bunch of T1s in a room and you’ll hear diagnosis stories all day. These girls were sisters, diagnosed a year apart.

And the younger one was Sherry.

We laughed at how weird it was, meeting eight years later in the gym of Joslin. There’s not a lot of us T1s in the world. The odds were pretty small that I’d run into another diabetic outside of Joslin, but to have gone to school with her before either of us was diagnosed and then meeting here was kind of a creepy connection. I didn’t want my superpower then.

The superhero in me wants to trade in a connection superpower for a cure superpower. In the meantime, I’m glad that the DOC can help me in my quest to connect. And I don’t have to wear a cape.

I wonder what’s happened to Sherry and her sister. I wonder about all of the people I meet with T1 diabetes.

And I wonder if Michael P. is still breaking hearts.