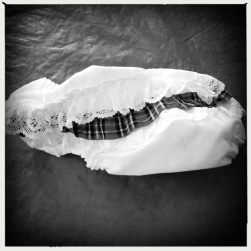 These are not my knickers. Honest.

So, yeah, this article has my knickers in a twist.

I hate with a passion when “reporters” (In this case, I’m stretching the definition.) don’t bother to take the proper time to do research when it comes to Type 1 diabetes. We already deal with the Diabetes Police, but to see it in print always sends me into orbit. And this struck close to home.

Like my friends, Kelly Kunik and Melissa Lee, who I see as generals (rocking übercool outfits) in the Diabetic Knickers In A Twist Club rallying the troops when there are inaccuracies in reporting, I realize it’s up to diabetics to point out when the media gets it wrong.

The UK Editor-in-Chief of Vice.com will have this snuggled into his inbox for Monday.

Dear Alex,
I recognize that your position at Vice.com most likely does not place you in a micromanagement position, overseeing every tiny thing on your site, but it would be remiss for me to let this article go without mention.

Rachel Hardwick’s article on diabulimia is, quite frankly, rife with inaccuracy that could have been quickly corrected through simple fact-checking. Relying on a single interview with one person who, as she states, is a “recovering diabulimic/bulimic” and not a medical professional or gosh, even Google, is simply poor journalism.

The statistics she has chosen are pulled from articles almost ten years old or, frankly, from thin air. 80% in Australia? I’d love to see a medical journal showing that percentage. (And the use of a possessive “s” rather than a plural? Anyone who writes, even as a full-time intern, should know better.)

Apparently, in the UK, a third of diabetic women between the ages of 15 and 30 are skipping their insulin injections in order to lose weight. In America, the figure’s been estimated at 40 percent, and in Australia at an almost unbelievable 80 percent.

The facts that the subject states are also incorrect.

What else can happen if you skip your insulin?
It can make you infertile, you can end up with peripheral neuropathy (damage to the nerves, usually in your hands and your feet), autonomic neuropathy, which means low blood pressure, as well as heart problems and kidney disease.

So the same as undiagnosed type 1 diabetes then – basically really awful. Why haven’t I heard about this condition before?At the moment diabulimia isn’t officially recognised as a mental disorder, but DWED are hopefully getting it in the DSM (Diagnostic and Statistics Manual), which comes out in May. At the moment, they’ll wrongly diagnose you with anorexia, then in hospital they’ll feed you all this high-sugar food, which isn’t good if you’re diabetic!

It’s not the same as undiagnosed Type 1 diabetes. Those individuals, while initially producing small amounts of insulin in their body as the islet cells are killed off, often end up in diabetic ketoacidosis, hospitalized, and hopefully, are treated quickly. If not treated, well, they die. Diabulimics choose to omit insulin on a regular basis, but do not stop taking insulin altogether. They take just enough to keep them out of hospital, but live with very high blood sugars.

The subject states that “in hospital they’ll feed you all this high-sugar food…”. In the almost thirty years that I have been Type 1 diabetic, I have never received a tray of “high-sugar food”, because I was identified upon intake as a diabetic.

(As to why hasn’t Rachel heard about this before? I have no idea. If you Google “diabulimia”, you’ll get thousands of hits and it’s been covered in the media before. I spoke to CNN and dLife TV about it in 2007. Countless medical abstracts and personal blogs highlight it. However, if you’re not a Type 1 diabetic, you probably wouldn’t know of it.)

There is no mention of the psychological treatments of diabulimia that often help women (and men). It’s a psychological issue that manifests physically. The sensationalized article is shoddily written, poorly researched, and unfortunately, if it was meant to draw attention to the single subject’s non-profit, it failed.

Why do I care?

Out of the global diabetic population, only a small segment of us are Type 1, yet we are often lumped in with the Type 2 group. Reporters, even those from major news networks, get it wrong and give misinformation. Without those who know the right statistics and information speaking up, we become gross caricatures of who we really are.

And most of us don’t go blind or have a stroke or lose a kidney or die. Most of us get help with diabulimia, learn from our mistakes, and move on. I should know. I’m living proof.

There. I feel better. I can untwist my knickers. For now.

Have a great weekend!