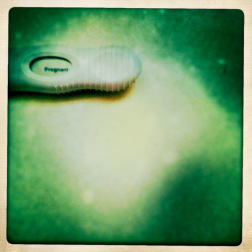 - Japanese saying about resilience translated as “Fall down seven. Stand up eight.”

For us, it was fall down five and stand up six.

It was never a question about being parents. We wanted kids. Adored our nieces and nephews and played peek-a-boo in restaurants with grinning toddlers, but we wanted our own. By the time John and I started dating, we were…ahem…mature (that means “old” to teenagers), so we were financially secure, had careers, and knew the time was right to start building a family.

Joslin Clinic rocks for a lot of reasons. One of them is that when I was first diagnosed, I was told that despite what others may have told me, I could have a successful pregnancy. It just took a lot of work. Years later, I was ready to put that to the test. A1C was 5.5 and I felt great. My endo gave his blessing and we were off…

The joy of seeing those two lines for the first time. You never forget it. I started knitting a baby blanket. I collected information about cribs and strollers and cute onesies. I walked on air for days, filled with a happiness that I didn’t think possible. And then the air got sucked out from under me and I plummeted. We miscarried.

I say we, because I wasn’t alone in these feelings or the aftermath. John held me as I wailed and railed at the universe for being unfair. He was the rock to my deluge of tears, holding fast to the belief that it would eventually be all right. We comforted each other and thought that this was a fluke. After all, 1/3 of all pregnancies end in miscarriage. I know a lot about statistics, but this one was hard to swallow. I put the knitting needles and unfinished blanket away.

It wasn’t a fluke. I got pregnant again immediately and this time, the blanket came back out  but didn’t shout it from the rooftops like we did previously. Good thing because I lost this pregnancy a few weeks later. My blood sugars were stable. I was in peak physical shape. Why was this happening?

When I don’t have answers, I go to an expert. I was done Googling and reading statistics. We just wanted to have a baby. We shuffled off to our first appointment with a reproductive endocrinologist that my endo worked with and left lightheaded from all the information they gave us and all the blood they took. Invasive tests and karotyping and more lab work brought us no closer to why we weren’t rocking a baby to sleep in our arms. They had no answers for us and that hurt.

The third time we were pregnant, I held my breath. I didn’t want to get my hopes up. John walked on eggshells around me, careful to be supportive and acutely aware of how fragile I was. But I felt better and even made an appointment to see a Registered Dietician to talk about my dietary needs in the first trimester. HCG levels were going up. I took the baby blanket back out and started to believe that it would be OK.

But it wasn’t. The reproductive endo called to tell me that the HCG levels were dropping. It was over.

Like a lonely moon circling a dead planet, John watched from a distance as I crumbled. I wanted peace and solitude and to be alone. What I really wanted was to be pregnant and have my husband cradle my growing belly at night as I slept. I pushed those thoughts away along with him. It wasn’t a happy time.

Wounds heal, but the scars remain, itching to be scratched long after they’re faded. It took us about a year to start trying again. It wasn’t a shock that we got pregnant quickly. That wasn’t ever the problem. We told no one this time, until well after the sobbing phone call I made to John about the bleeding. What can people say to you after your fourth miscarriage? “Sorry.”? They knew it was trite. “Are you thinking of adopting?” We did, but we were also in the process of deciding to move and in our hearts, we still held out hope.

New city. New reproductive specialist. New blood test and a revelation. I had a genetic mutation called homozygous MTHFR C677T, which is a clotting disorder that can cause recurrent miscarriages in the first trimester. I felt… vindicated. We had a reason, and more importantly, an easy fix. Baby aspirin and Lovenox, an anticoagulant injection daily in the last two weeks of my cycle and then if I was pregnant, throughout the pregnancy.

I peed on a stick in the Target bathroom across the street from our rented apartment, then walked home in a daze, silently handing it over to John as if it was hot. This pregnancy caught me by surprise. We hadn’t really been trying and had been out in Las Vegas the week before, where I had been working crazy hours on a tradeshow floor and staying up late late late drinking far too much caffeine. We were in the process of closing on a new house so I was distracted. Apparently very distracted.

I shot the Lovenox. I followed the doctor’s advice. I kept my blood sugars stable. I refused to take the baby blanket out and work on it until the day John said: “You have to have faith.” I wanted to have faith.

We learned that it wasn’t the MTHFR or my diabetes. It was undetected endometrial polyps that caused the miscarriage. The doctor said that diabetics are prone to polyps like this. Had we known, it could have been prevented. The doctor was gentle and kind when he told us.

I think now that out of the ashes of the failures, a little spark of resilience grew slowly. That like diabetes, you can feel like you’re failing, but you have to keep trying.

We stood up six.

The finished baby blanket is colorful stripes of blues and greens and reds. It’s beautiful.

And so is our daughter.